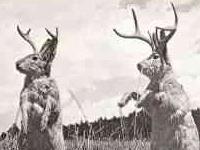 If I’d been a couple of years younger when I first encountered the jackalope I probably would have believed it. Travelling in Wyoming in 1977 with my parents, I saw a taxidermist version of the jackalope in a store. It certainly did look real.

The jackalope is a species of antlered rabbit. It is known to be highly aggressive, willing to use its antlers to fight. Thus, it is also sometimes called the “warrior rabbit.”

The Museum of Hoaxes has a lot more on photographic and other hoaxes.