Behind the Scenes Tour of Cincinnati Union Terminal

Last weekend the wife and I attended a Cincinnati Heritage Program tour behind the scenes at Cincinnati Union Terminal. It was a very interesting tour and included stops in behind the screen and in the projection booth for the Omnimax theatre, down to the trainyard (where Amtrak still stops once a day), underground to the old baggage handling basements/tunnels, through the physical plant (where they freeze water during summer nights to provide air conditioning during the day). We then got to visit in the preservation area of the Cincinnati Historical Society Library to see how they help preserve the maps, books, newspapers and other ephemera in their collection. 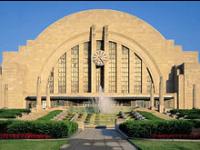 The highlight of the tour came after a short break when we then moved to the front of the building and ascended four flights of stairs that led to an entrance in between the outer and inner windows. We then walked out on an opaque glass floor between the windows (where our shadows could be seen moving in mid-air from inside the terminal) and up into the clock face on the front of the terminal. Just looking at the picture doesn’t do the size justice; the clock face is around 20 feet in diameter. You end up climbing a small set of stairs and move out in behind the clock face to see the inner clock works.

After visiting the clock, we then moved into the “high steel” above the rotunda. A series of ladders, stairways and walkways lead us 115 feet above the rotunda floor over top the inner shell and beneath the massive ceiling. Winches attached to the steelwork currently hold up the largest indoor flag in Ohio (I think the size was about 30×80). A massive old winch in the same area was used in the 30’s and 40’s for advertising automobiles by hanging them from cables through the ceiling. The tour then ended after descending from the steel and back down six flights of stairs to the rotunda floor and back into the public spaces.

I believe this has been just the second behind the scenes tour of Union Terminal that Cincinnati Heritage Programs has offered. Our guide said they’ll only do the tour in the wintertime since the area over the rotunda shell gets so hot. On a cold and snowy day in February it was probably 80+ degrees when we got to the top of the steel. It supposedly gets up to 130 degrees in the heat of the summer. If you’re interested in the tour, you’ll have to keep an eye on the Cincinnati Heritage Programs Tour webpage to see when the next one is scheduled.

The Cincinnati Heritage Programs Tour was a well organized and presented tour. We’re looking forward to going back to Cincinnati in the fall and joining the Cincinnati Subway Talk and Walk to explore some of the abandoned subway tunnels and learn about the system that has been abandoned since 1928.